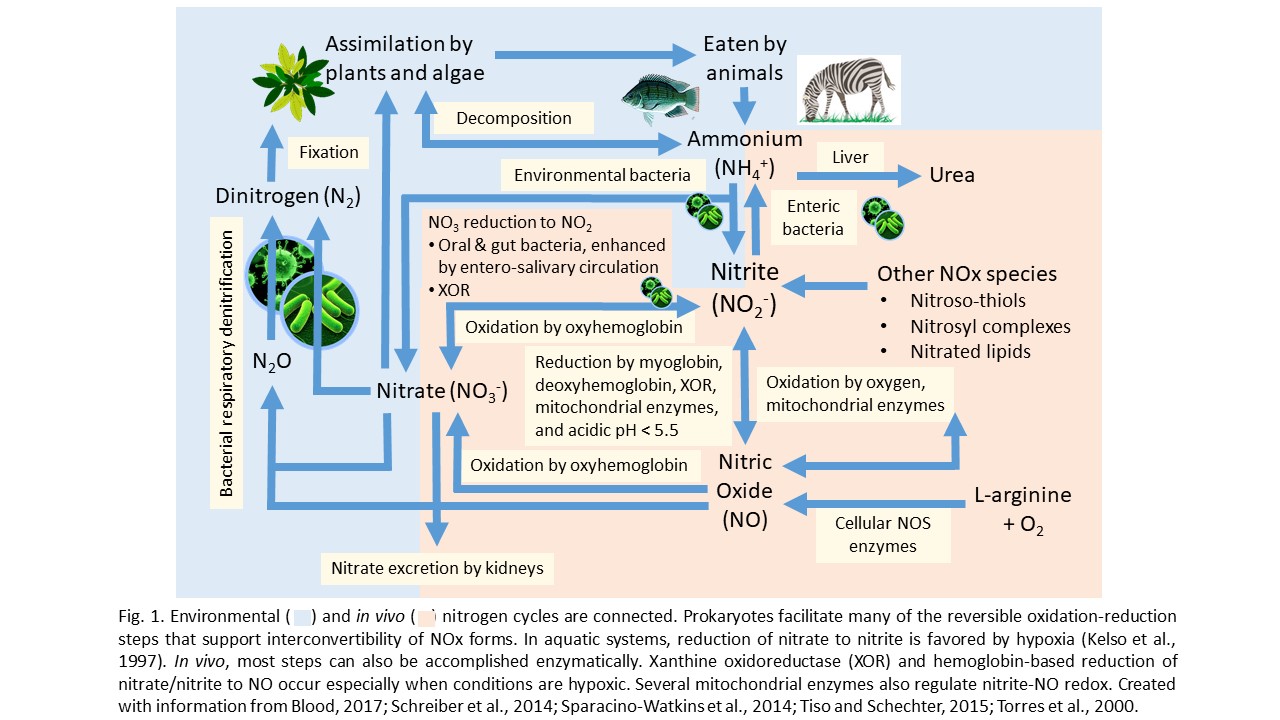 Publishing a paper is always a small triumph. In the case of my new nitrate review, co-authored with Dr. Heather Hamlin (University of Maine), the outcome is rewarding because our synthesis went way beyond what we imagined we would do. But we also didn’t answer some of the questions we set out to resolve!

Basically, nitrate physiology is way more complicated and interesting than we thought, and there is a ton we still don’t know. The most interesting thing I learned from writing this paper is that the ecological nitrogen cycle (the one we often learn about in high school) also happens inside the bodies of animals and has major effects on cell function (see the featured image above, which is also Figure 1 from our manuscript).

The movement and metabolism of nitrogen through animals is a continuous process. For our projects, the most relevant part of the story is that nitrogen exists in cells as nitrate, nitrite, and nitric oxide and these three forms are completely inter-convertible. Data to support the inter-convertibility of the three forms has only developed in the last 10 years.

In animal bodies, the most influential form on nitrogen is nitric oxide, which governs diverse cellular processes, ranging from hormone synthesis to blood pressure regulation to neural function. So, nitrate in the environment, which comes mainly from fertilizer pollution, sewage runoff, and fossil fuel consumption, has the potential to change how organs develop and how cells talk to each other.

But whether this is good news or bad news for health depends on several factors. The source of nitrate is important, as is the amount, the timing, and other health factors.

I would say there is good reason to limit consumption of nitrate in contaminated water or processed meats. But what about all those veges that are high in nitrate? The beets, kale, spinach, rocket, and other super greens? In combination with vitamin C and plant-based antioxidants, the vegetable nitrates appear to be good for health – they reduce blood pressure and boost immune function (among other things).

Conversely, nitrate in drinking water and processed meats is linked with increased risk of type 1 diabetes, various cancers, and altered fertility. But, the patterns remain unclear and there is much more work to do.

You can read the details of our nitrate exploration and our recommendations for future work in the March 2018 issue of General and Comparative Endocrinology.

Let us know what you think!