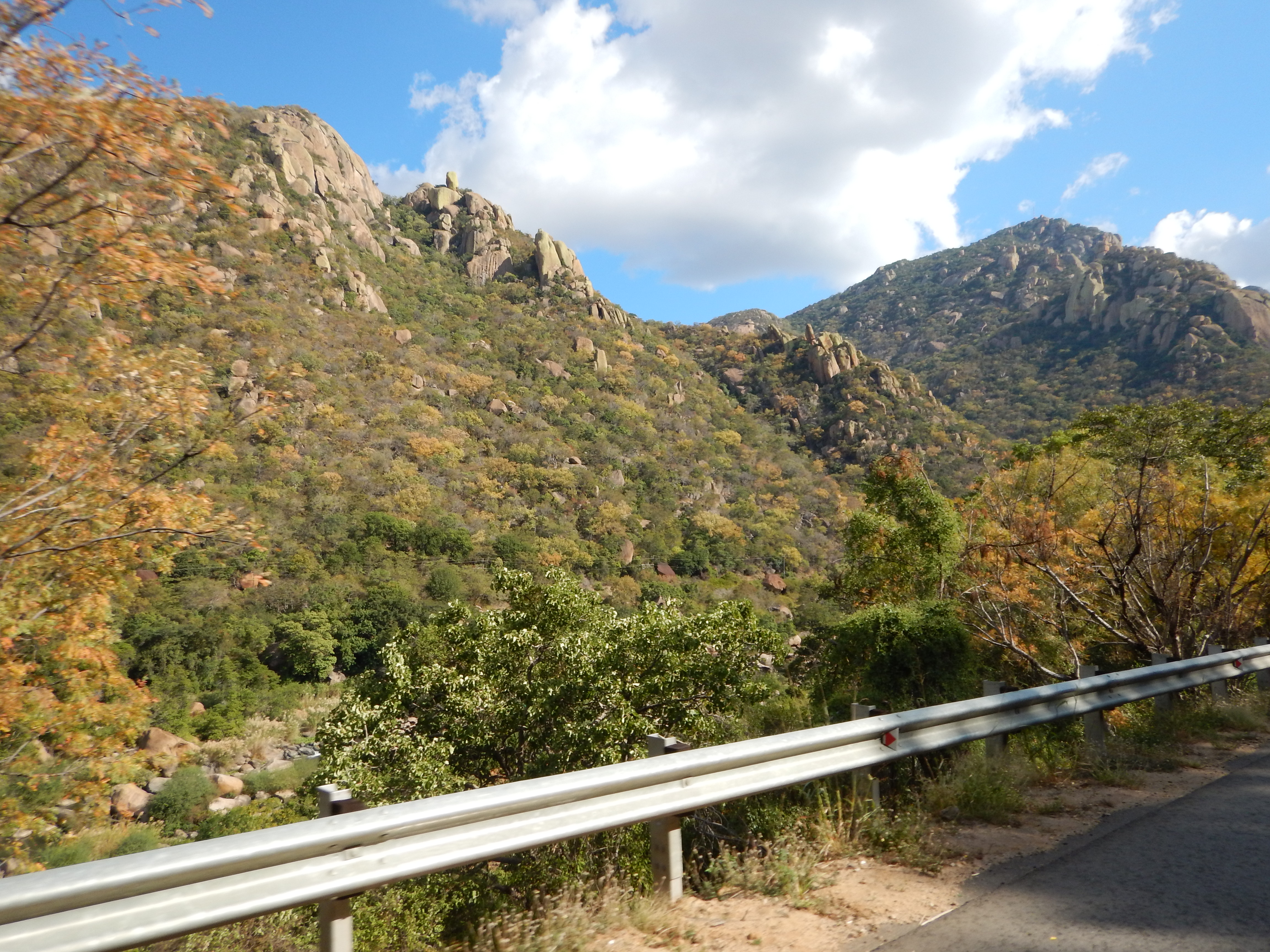 The drive from Kruger to Pretoria, through Nelspruit passes flat banana plantations, boulder covered mountains, smoky factories, and shimmering towns.  There are signs of affluence in unexpected places.  For example, people who work in cities still own land in rural places where they were born.  On these rural homesteads, they construct large homes for weekend getaways and family reunions.  But, without home loans, people must build their houses as they earn the money, with the result that many homes remain under construction for years.  We passed one particularly sprawling community of luxury homes, mostly unfinished, and largely uninhabited, in the middle of nowhere.  It’s like a reverse ghost town – new, but no one lives there.  I guess the community fills up on holiday weekends. 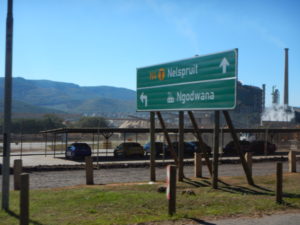 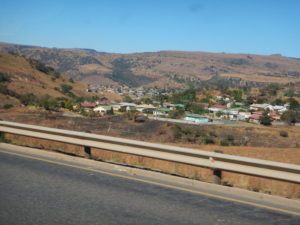 The mountains were my favorite part, with their boulders and aloes and trees in yellows and greens.  But when I asked our friend Pete about hiking, he said it’s not as easy as you’d think.  Most of the land is privately owned and hikers are viewed as trespassers.  It’s an unfortunate paradox for the outdoor loving person.  There is nowhere to go for a simple walk in nature.  The National Parks have too much wildlife to make walking safe.  The rest of the options are not available unless you can afford to buy a mountain! 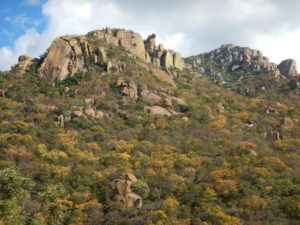 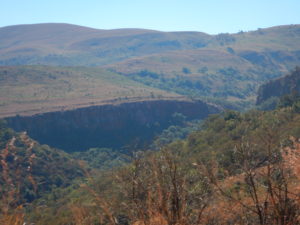 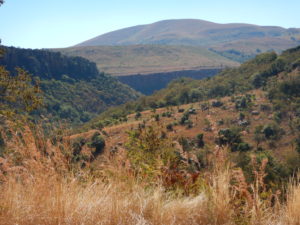 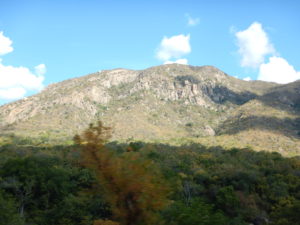 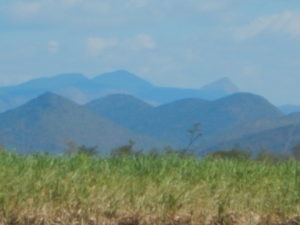 Between Nelspruit and Pretoria, the land flattens and there are lots of factories, all filling the atmosphere with smoke, presumably from burning coal.  It made me think of The Lorax, by Dr. Seuss, a reminder of the environmental price we pay and will pay in the future for all that stuff we buy in stores.  South Africa produces the vast majority of manufactured goods consumed in southern Africa.  All the paper, coca cola, packaged cookies, shampoo, and electricity that I bought in Botswana came from South Africa.  In fact, on our drive to Pretoria, we passed paper mills and the planted forests that support them.  In that way, it felt a bit like Louisiana. 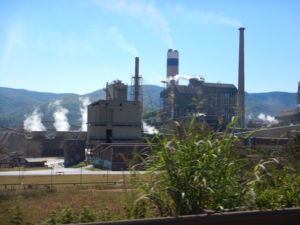 The drive took a good six hours, maybe seven.  Our indulgent game drive in the morning meant we pulled into Pretoria after dark.  In Africa, dawn and dusk are the most magnificent parts of the day.  Evenings in particular have a characteristic feel and smell.  As the sun sets, its long rays are caught by the dusty air, amplified by cooking smoke that rises from the villages.  It’s a smell of coming home and the end of the day.  In Maun, the cows walk home at dusk.  They simply lift their heads from the grass and start walking, all together, towards home, wherever home is.  It’s a comfortable feeling as the stars begin to twinkle in the sky and the frogs take up their chorus as darkness descends. 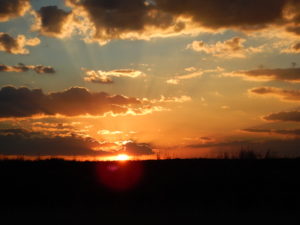 Smoke from cook fires is an ancient part of the African landscape, and a characteristic that I certainly love in the rural parts.  But near Pretoria, the density of humanity, the flat topography, and the lack of breezes combined with cook fires and factory emissions to create an oppressive atmosphere of low thick smoke.  Conditions changed from homey to a downright health hazard – the difference between a camp fire and a forest fire.  As we speeded past on the highway, I tried to imagine living with my family in a thick, acrid haze that recurred every night as we sat down to eat.  The thought was staggering.  I wonder about the respiratory diseases that must be spiking in these townships.  The asthma, the allergies, the lung cancer.  I don’t know the stats, but that’s what I’d expect. 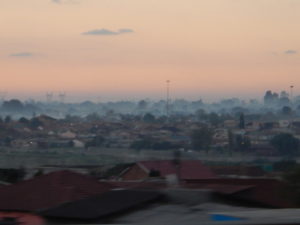 Pretoria at night is like any large city in the world.  Its multilane highways are well-lit conveyor belts connecting the city center with the outlying suburbs.  To me, it doesn’t feel particularly like Africa.  It’s too familiar.  On our way in, we stopped at a Macro to buy binoculars.  Macro is like Costco in the United States.  For a modest membership fee, you can have the privilege of buying pretty much anything you want for slightly less than normal retail and a lot less than boutique.  Thanks to Pete’s membership, we bought waterproof binoculars for $60 instead of the $120 we would have paid in the National Park.

And we learned something too.

When you leave South Africa as a tourist, you can get a refund on the VAT taxes you paid on retail goods.  As you might expect, actually receiving the refund is not as easy as you’d hope.  At the airport you must follow a circuitous route designed to deter all but the most determined or unsuspecting travelers.  We were probably both.

Before security, you must show your VAT-refund-eligible items to a sweaty and overworked officer who is the sole employee at the end of a long line.  In front of us was an Arab family, complete with ladies in burkas.  They had 4 carts loaded to capacity with suitcases and packages.  Balanced precariously atop one of these mounds was a pile of 4 dozen glazed donuts in boxes.  As we waited, this scene provided a modest amount of interest.  We wondered when they planned to eat the donuts – that would mean about nine donuts per person if the entire family was in the VAT line.  Alternatively, the donuts were a treat for family back home.  I admit that when I choose presents to take on airplanes, they are of the small, robust variety, unlikely to go stale, get smooshed, or lose their glistening luster.  But maybe the donuts are just that good.

After about 35 minutes, we were invited to show our binoculars and our new tent, also purchased at Macro with the help of my cousin and her membership, to the sweaty employee.  This fellow was remarkably helpful given the tedium and endlessness of customers and the gray, industrial surroundings.  He validated our receipts with official looking stamps and sent us on our way to the VAT refund office on the other side of security.

There we waited in another line.  This time our view encompassed various shopping options where we could spend our VAT refund.  We busied ourselves imagining the various African crafts we could buy.  Another 15 minutes floated by.  Finally a lady waved us forward.  Our passports were checked, our receipts noted, and our refund declined.  I mean what country really wants to return sales tax to its visitors?  I think they must furnish their VAT-refund staff with a list of ways to prevent refunds.  In our case, the reason for the decline was that our macro receipts bore the names of the people who had let us use their memberships.  Even though we paid for the items, which we could prove by producing the credit card used for the purchases, the lady was immovable on this point.  Not being one to keep other customers waiting, she waved us on with a firm hand.

Well that was a useful way to spend an hour at the airport.  Next time, I think we should just have a beer and enjoy a nice view of the runway.

It was a pleasant flight back to Botswana and a bit like coming home. 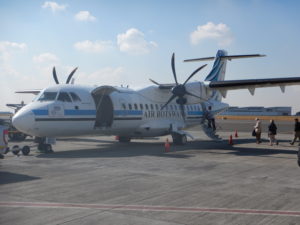 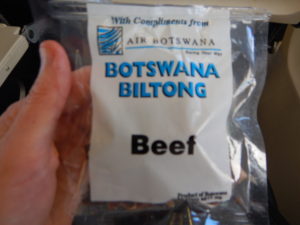